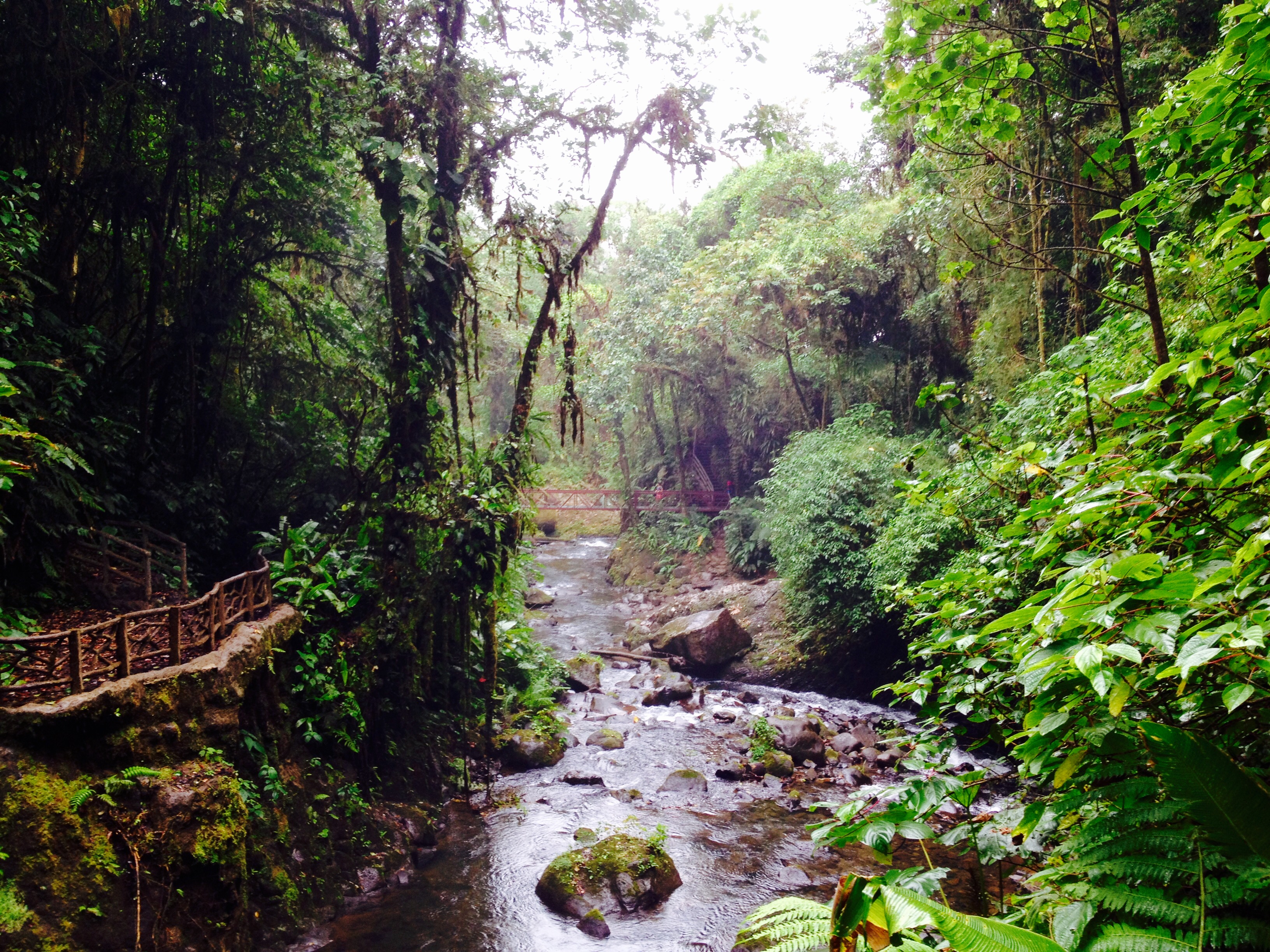 Photo: Taken during a hike through the rainforest at La Paz Waterfalls in Costa Rica. …I suppose hacking one’s own rebellious ego is akin to building a bridge over the stubborn currents of one’s own stream of consciousness. 😉

I often have a desire to write something to share with the world, yet at the same time I often doubt if much of what I have to say is worthy of sharing — if others will find any value in it or not. Either way, the desire to share is still there, so today I am going to share a journal-style entry here on my blog. I suppose whether or not this falls into the category of “creative inspiration” is relatively subjective. I hope you’ll find something positive to take away with you.

I had been feeling on the ill side in the recent past couple weeks, although thankfully this past week has been a-okay for me. It seems I caught a cold/flu, as I’d been plagued with mild fevers, tons of congestion, and a bit of a cough. I thought I was rid of it after the better part of a week, but after a few days of feeling mostly better, it came back for another week or so.  (Boo!) And then, shortly after that cold finally went away, I was hit hard with a bad case of (what I suspect was) food-poisoning related diarrhea, which lasted for six days!!! (And I swear it was the worst I had ever experienced in my entire life thus far!!!)  …Sigh. Oh well! C’est la vie, I suppose.

As far as colds/flus go, I’d say whatever I had was relatively mild, and for that I’m very thankful. (Although I believe the diarrhea was the worst I’ve ever had in my life. Oy!) Apparently ’tis the season for these kind of colds here in Costa Rica — the transitionary period from the dry season to the wet, rainy season.

Last month, my sweetie came to visit me while I was in Costa Rica! He visited with me in San José for a total of nine nights (eight full days). We had a really fun time! 🙂 Unfortunately I picked up the aforementioned cold-bug the very next day after his arrival — possibly even the same evening as his arrival, as that’s when the initial symptoms had started to kick in.

Additionally, during the last few days of Steve’s visit, a nearby volcano erupted near San José (and is continuing to do so), spewing tons of ash into the air. Steve seemed to have quite the allergic reaction to ash in the air. He told me he felt so much better getting back to Vegas and being able to breath the cleaner air. I’d imagine that the poorer air quality here is playing a factor in my lengthy recovery, too.

During Steve’s stay, he and I visited a few of the museums in San José, such as the Pre-Columbian Gold Museum, the Jade Museum, and The National Museum of Costa Rica. We also went on a couple day tours outside of the city! The first tour was a rainforest tour. We went on a walk through a trail in the rainforest with a company called Rainforest Adventures, and also went on a tram-ride above the rainforest. It was very beautiful.

The following day, we went on a more intensive day trip. This second trip consisted of a visit to a coffee plantation where we learned about coffee plants and the processes of coffee harvesting, preparation and roasting, a visit to a volcano (not the one that had erupted the night before), plus a visit to another area of rainforest with wild-life sanctuary preserves and a handful of waterfalls. So much natural beauty! It’s amazing to realize that such a small country of Costa Rica is home to 6% of the world’s biodiversity.

My endeavors to learn Spanish have been coming along. I completed all the lessons available on Duo-Lingo for Spanish, which apparently equates to being 60% fluent in the language. I still don’t feel very confident speaking the language, however. When I have a visual, written reference, I feel quite capable of understanding the language. But when it comes to speaking it without any visual cues, that’s an entirely different story. What’s really interesting to me is that I’ll often find my French-speaking circuits kicking in when I’m wanting to access my Spanish circuits! That can be a little frustrating. Perhaps it is common, though. Steve has told me that he’ll often experience the same thing, as French is his second language as well. And yesterday while talking with a Francophone Canadian who has been living in Costa Rica for five years, I was told that when she was learning Spanish it would often trigger her second-language circuits, too (which in her case was English).

I started learning French from the age of five, so the process of learning that language was more akin to the way I learned English — I primarily learned it from exposure and practice. When it comes to verb conjugation, aside from past, present and future, I’m hopeless at telling you what the names are for the different conjugation tenses. (I swear I was never actually taught proper verb conjugation in English. I went to French Immersion school from kindergarten through the eighth grade, so the only class we had in English was  “Language Arts” where we read books and did reports or other creative assignments.) …That being the case, I’m having a bit of trouble identifying the more complicated tenses outside of the basic past, present and future tenses.

None the less, I love discovering interesting connections between languages. Just today, for example, I learned the Spanish word for sit.  To sit translates to sentar in Spanish, which I realized is very similar to the English word sedentary. After looking it up, sure enough, it turns out the root of the word sedentary comes from sedere, the latin word for sit. I’ve never studied latin before, but perhaps I might enjoy it.

Spanish and Italian also seem to have a lot of similarities. For this reason, and also because I love Italian food (vegan versions, of course) and would absolutely love to have an extended trip in Italy, I’d like my next language-learning endeavor to be Italian. 🙂

I’ve made an interesting realization and personal discovery related to the topics of goals, goal-setting, and goal achievement. For the longest time, I had dreamed about how cool it would be to be fluent in several languages and to be able to communicate with others from all around the world, no matter what their mother-tongue might be. But also for the longest time, I made no effort what-so-ever to actually start learning another language. There are so many things I’d like to learn in this life — not just languages — and one day not too long ago, while I was thinking about my learning goals and priorities, I had actually decided that I should all-together dismiss the idea of learning multiple languages in favor of devoting time to study other subjects, instead. I even tweeted about it:

…Then something magical happened. After years of not taking any action steps towards learning new languages, about three weeks later, I started learning Spanish!

As I thought about it, I realized that it was the step of letting go of my desire/attachment to wanting to learn languages that was the key factor in my path to learning a new language.

It sounds counter-intuitive, doesn’t it? I mean, if I truly wanted something badly enough, wouldn’t I just let that desire fuel me and drive me to take the action steps needed to work towards and complete a goal? That would seem to make a lot more sense. I think this desire-and-relentless-persistence path can (and often does) certainly work — I know I’ve used this approach for many of my previous goals, too, resulting in varying levels of success. But lately, I’ve been finding that path isn’t really working well for me anymore these days… it’s almost as though that kind of path leads me to near-constant self-sabotage and perpetual procrastination.

The thing is, I know I have a really stubborn aspect to my personality and ego. It’s almost as if there’s a part of me that doesn’t like telling myself what to do, or listening to what I think I “should” do, and hence, I’ll rebel against myself! I swear, it’s the weirdest and most frustrating thing ever.

However…. it seems if I play a little reverse psychology on myself and tell myself that I’m simply letting go of a particular goal and desire… then somehow, almost magically, that seems to free up a part of my mind (as well as some associated latent energy) that will now suddenly want to whole-heartedly devote itself toward achieving that original goal or desire without needing any mental coercion on my part.

And then from there, my sense of passion for pursuing a particular goal seems to have been renewed. …This is what seems to have happened with my language learning goals, at any rate.

I’m going to try this approach with other goals of mine, too, such as learning math and physics (I’ll have to re-learn high school math and physics and basic calculus, as it’s been a very long time since I’ve used that part of my brain), writing goals, career and finance goals, and even personal relationship and lifestyle goals.  🙂

Do you have any non-conventional methods or tricks for your own personal motivation on pursuing and achieving your goals and desires? If so, I’d love to hear about it. Feel free to share in the comments! 🙂