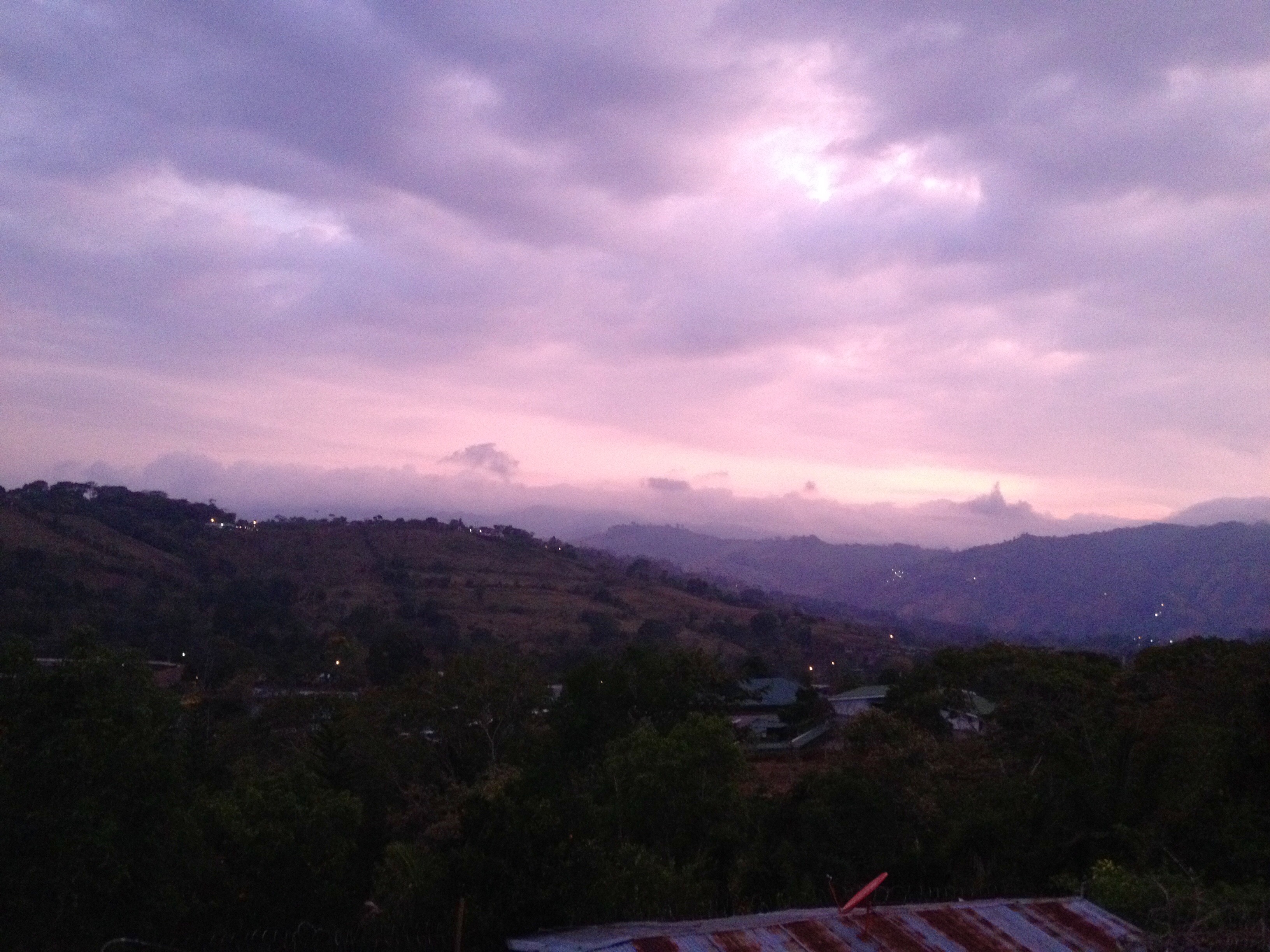 Amazing smokey purple-pink magic sunset I captured from my balcony in Costa Rica.

As I’m sure you’ve figured out from the title of this post… I’m in Costa Rica!!

Here’s what I’ve been up to over the past six weeks:

So many different types of things have been happening over the past six weeks, it seems too much to cover in detail in one blog post… hence, the above list! 🙂

If anyone happens to have any questions about any of the above, please feel free to ask in the comments, and I’ll be sure to respond. 🙂

It’s hard to believe I’ve been here in Costa Rica for three weeks already. I’ve been taking it pretty easy. But in another sense, I’ve been a bit hard on myself, as I’ve been tormenting myself thinking obsessively about the future — My career path, life in general, and specifically regarding figuring out where to stay next; I want to stay somewhere that isn’t too pricey nor too isolated, yet someplace that also meets my needs for comfort and happiness, such as a pedestrian friendly and lively area, vegan friendly cafés and restaurants nearby, a cozy room or apartment that feels like someplace I can truly call home, and friendly people that I can converse and hang out with and relate to. I’m pretty sure I found the perfect spot for me, and I’m excited to temporarily live there (back in San José) for more than a month after the end of my current month’s lease for the budget apartment where I’m currently staying in Pérez Zeledón / San Isidro de El General.

As mentioned above, I’ve also been  tormenting myself trying to figure out “my life”. Despite having spent three weeks on my own here in Costa Rica, I still feel as though I haven’t quite figured anything out. Actually, that’s not entirely accurate — I think I’ve figured out one of my biggest hinderance, which is definitely a good step in the right direction.

It’s become somewhat of an ingrained habit of mine to perpetually think/live in the future; continually planning out when and where and what I’ll be doing when I’m not visiting or traveling with the love of my life, wanting to nail down when exactly we’ll get to be together again, and so on. This mental habit had already been a part of my life long before Steve and I ever got together, based on the contract-nature of theatre work, not to mention other aspects of youth that reinforced this particular pattern. That is to say, I’m rather used to it. But seeing as I’ve been in a long distance relationship for over six years now, this habit has become even more ingrained than before.

What it boils down to is this: When I have time to work on projects I’ve been wanting to work on, I’m compelled to put them on the back burner while I instead obsess my focus on determining my plans for the future, which more often than not results in ignoring the here and now and thus getting much of nothing done — save for possibly figuring out and making travel plans, like booking flights and accommodations. These little things give me a little sense of security in my very “up in the air” lifestyle.

It’s becoming obvious to me this habit gives rise to a mind that doesn’t know what to do with itself when it’s not attempting to focus on the future — or, in other words, when it’s focusing on anything but the here and now in the present. It can be hard for me to focus on the present moment because I may start feeling anxious over my lack of future-focused thought.

I know, this is kind of messed up! I know that if I want to live the life of a conscious creator, I must drastically change my predominant thought patterns and mental habits; if I keep doing what I’ve been doing, I know I’m just going to keep getting more of what I’ve already been getting! Can I have a habit and thought pattern interrupt, please?

What are the best methods of pattern interruption that will give rise to a thorough focus on the present moment of a creative task? I’m still trying to figure out the best approach for pattern interruption, but so far I’ve come up with a few simple tactics that lend a helping hand:

I plan on putting these practices to use over the coming weeks. I think it’s working, because it helped me to focus on writing this very blog post. (I started it at least a week earlier but then felt too mentally-cluttered to focus on finishing it.) Focusing on the present moment instead of trying to figure out “my life” and “the future” definitely helps.

For now, I still don’t feel like I have my life figured out quite yet, and I still have a lot of uncertainty as to what my future might be. But that’s okay. I think it’s better to live and create in the power of the present moment vs being stuck in my head all day wondering what the hell I should be doing my life. 😉

…And so, at least for now, that’s what I’m going to do — focus on conscious creation in the flow of the eternal now.  Let’s see where I end up!