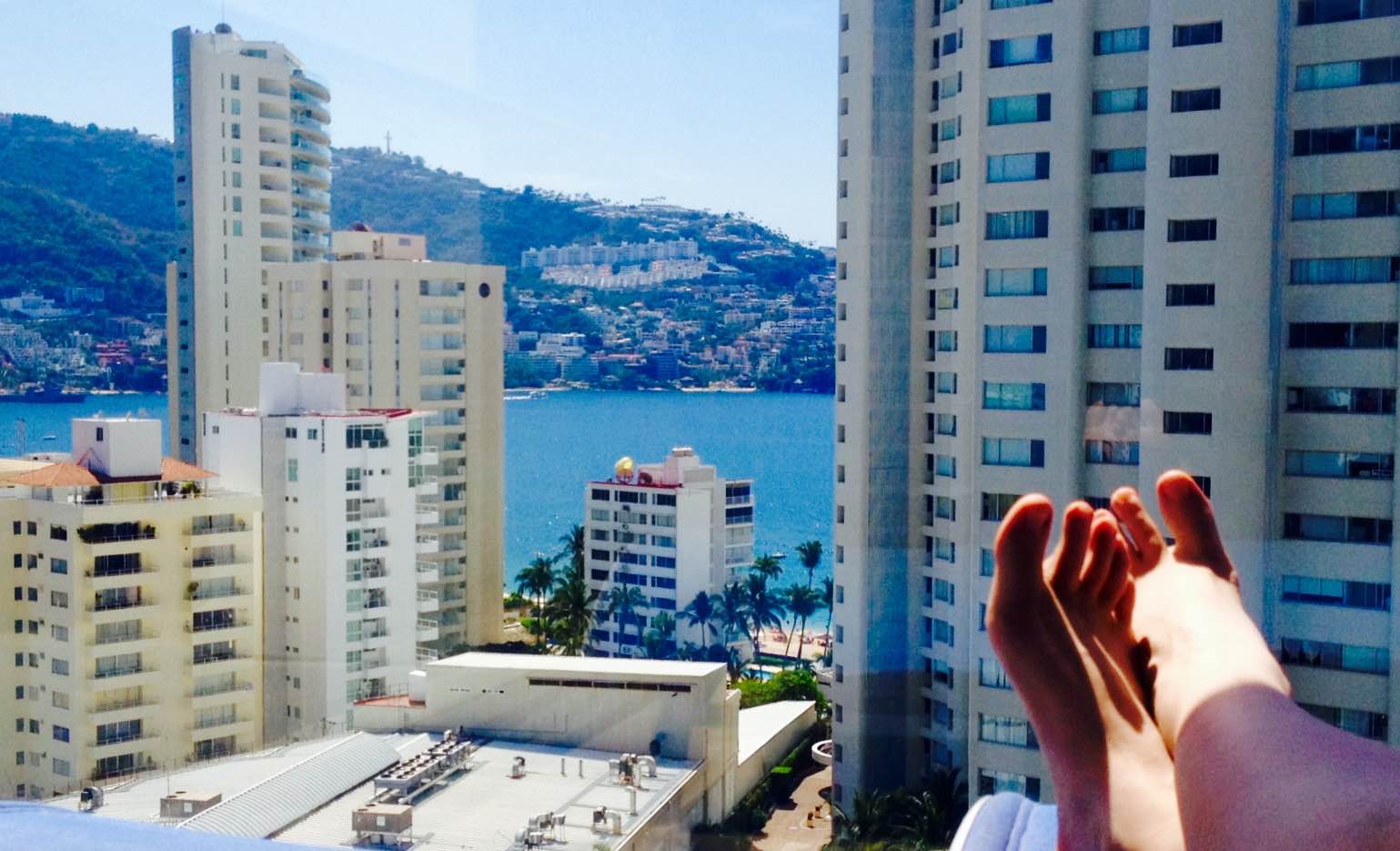 Hola! I’m writing today from the beautifully warm and sunny city of Acapulco!

Steve and I traveled from Las Vegas to Acapulco during the early morning of Saturday, February 13th. (In other words, it was a red-eye flight.) We had a longish layover in Houston prior to boarding the plane that brought us to Mexico.

This marks my very first visit to Mexico! Nearly everyone in my family has been to Mexico before except for me, but now I can finally say I’ve been there too! (Although, from what I understand, my family tends to stay at resorts, whereas the touristy resort scene tends not to be my thing.)

Steve and I have the pleasure of staying with a couple friends of ours for about a week, and then afterwards we may stay at a hotel for up to another week. Not everything is set in stone, though, so it’s always possible our plans may change.

Our friends Sasha and Isabelle are renting an apartment via Airbnb. It’s very close to the beach and has a lovely view! Case in point, see the pic at the top of this post! …And that’s only one aspect of the views available!!

Yesterday (which happened to be Valentine’s Day), in the late morning, Steve and I took a barefoot walk along the shore of the beach. The sand is a bit rougher than what I’m used to; I have pretty delicate feet, so walking along the coarse sand for an extended period of time caused the middle of the soles of my feet to become slight red and swollen due to the irritation. D’oh! But thankfully the sting didn’t last too long throughout the day.

It was so lovely to walk in the water of the Acapulco Bay, and it was unbelievably warm! I’d say it was the warmest body of water that I’ve ever walked in or along in my entire life.

There’s a great vegan restaurant near where we’re staying called Verde Vegan. You can find them on Happy Cow  or on Facebook. (They also have an account on Instagram!) We’ve only had one meal there so far, but it was great. We had green juice and tacos, and we also shared a rich piece of gluten-free cake for dessert. I’m hoping maybe we’ll go back there again today! 😉

I’ve been trying to learn some Spanish while we’re here. I’ve downloaded Duolingo and have been going through the courses on there. Granted, it’s pretty simplistic at the beginning, but at least now I definitely know a lot more Spanish than I knew before. Sasha and Isabelle also have a different audio program for learning Spanish. Steve and I listened to some of it last night, and then more again today. It involves vocally practicing various new words and phrases. I can get a bit shy speaking foreign languages to locals, but I find that placing orders and asking questions in restaurants are great places to start.

Sasha and Isabelle will be attending a conference this weekend called Anarchapulco. (In fact, I think Sasha may be speaking at it as well.) They invited Steve and I to attend as well, so that’s what we’ll be up to next weekend. I’d say I’m pretty familiar with the philosophies behind Anarchism, given that I’ve worked at a worker-run all-vegan café and bookstore in Winnipeg for a year in the past. Most anarchists I know tend to think of capitalism as the root of the world’s problems, but what’s different about the philosophy of the anarchists gathering at Anarchapulco is their enthusiasm for capitalism. I’m curious to see how the two worlds of anarchism and capitalism collide.

After the weekend conference, Sasha will be hosting his own conference workshop on the topic of dating and relationships. He’s asked Steve to be one of many speakers there. I always enjoy listening to my sweetheart give a presentation and interact with those in attendance; he loves to speak and share his ideas with growth orientated audiences.

Schedule-wise, so far this week is pretty open. Perhaps we’ll take in some of the touristy water sports available at the beach area, like jet-skiing, parasailing, snorkeling and scuba diving.

It’s weird: I love being by large bodies of water like oceans, seas, lakes, bays, and even beautiful rivers, but I’ve never cared that much for swimming or sunbathing. I’ve learnt from a young age that water stings my eyes, and so I usually tend to avoid the chance of getting water splashed in my face or eyes whenever I can. …Even when I shower! I think having poor vision and being in need of corrective lenses (whether contacts or glasses) plays a role in that, too.

At any rate, I’m definitely up for trying something new. I’ve never been jet-skiing, parasailing, snorkeling or scuba diving before. And not only does it sound fun, but based on what I’ve seen from here, the jet-skiing and parasailing also look like fun!

p.s. I was actually able to translate that last sentence on my own! Yay for learning new languages!!