Something interesting must happen every 10 seconds… And it will! 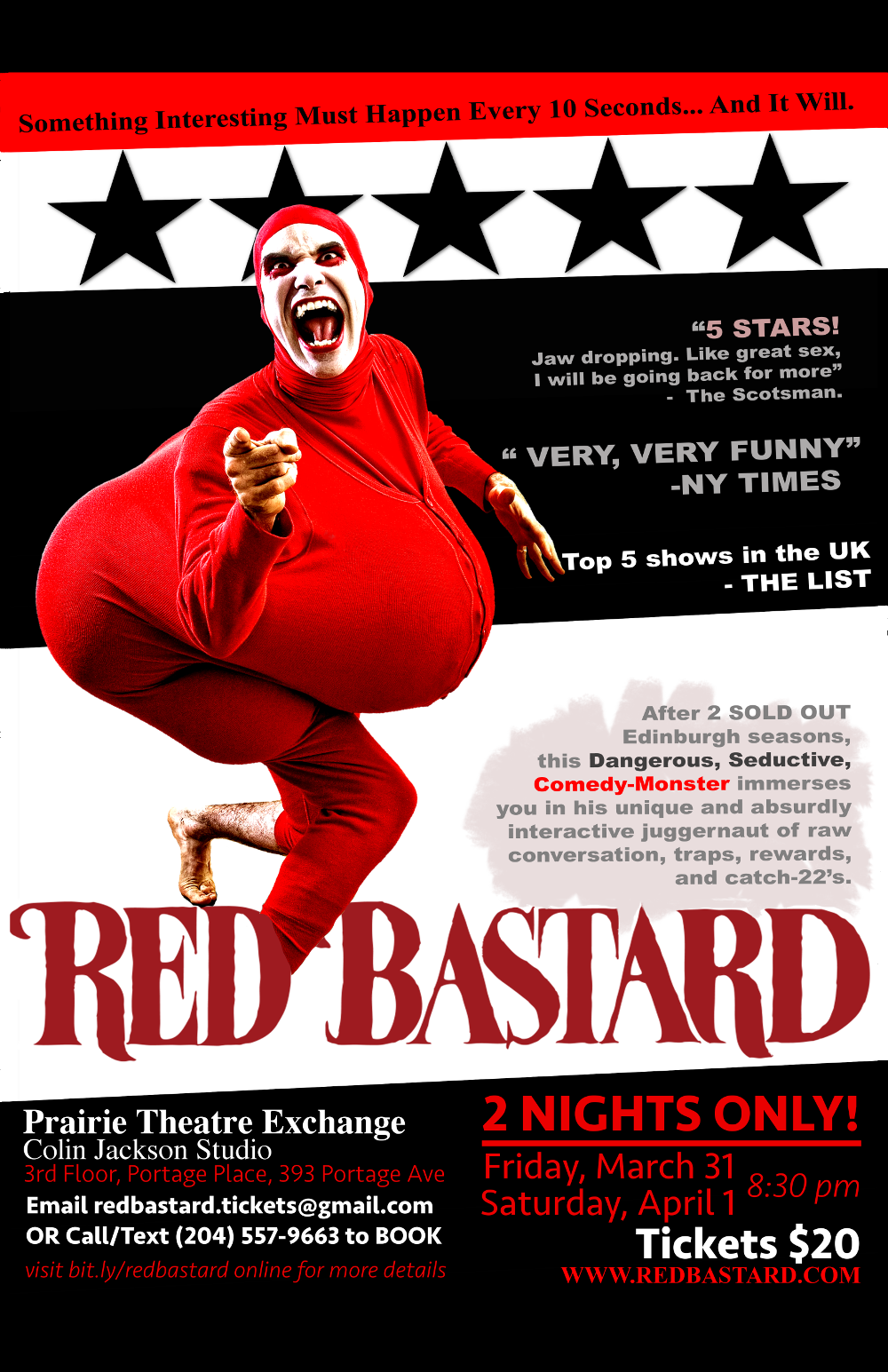 America’s dangerous, seductive comedy-monster delivers on this promise in the show that earned him FIFTEEN five-star reviews and was ranked Top 5 Shows at Edinburgh International Fringe.

Experience the madness as Red Bastard immerses you in his absurd web of raw conversation, traps, rewards, and catch-22’s.

“Like great sex, I will be going back for more.”
– Kate Copstick, The Scotsman (UK)

Eric Davis has been traveling through Europe with his wife, Amanda Zidow, a lead singer, cellist, and character in Cirque du Soleil’s touring production Amaluna, which recently wrapped up its 7-week run at London’s prestigious Royal Albert Hall. The couple met in Los Angeles when they were both performing in IRIS, Cirque du Soleil’s resident show about cinema.

Presently, Davis is developing a new show for Red Bastard that will debut at the Edinburgh Fringe Festival in 2017 at Pleasance Theater. In his new show, Lie With Me, Red Bastard will mock liars, cheaters and the unwritten rules of Romantic Love that compel people to lie and cheat in the first place.

Since performing as Red Bastard, Davis has been yelled at, sat on, spontaneously tackled by the entire audinece, french kissed, advanced on by a broken bottle, rebuked by priests, handcuffed, pelted with used panties, and “invited under the dress of a lady SO pregnant the audience feared she would POP!”

“I’ve witnessed entire audiences burst into tears, or hug an individual of the audience or burst into standing ovation for people’s personal acts of courage,” shares Davis. “Not to mention the countless times I’ve been told by people that the show has literally changed their life.”

“People have proposed marriage, quit their jobs to start new careers, mended broken relationships….  My wife even came to a show, declared she would divorce her husband and married me. It’s true!”

As evidenced from the above, on the surface Red Bastard can be a mere comedy show, but beneath its layers exists the potential to be something much, much more — its depth and impact completely depend on the audience and how far they are wiling to go.  …Do you have the courage to “show up”?

Learn more about Eric Davis and Red Bastard at RedBastard.com.

NOTE: There will ALSO be a BOUFFON WORKSHOP led by Eric Davis, held at Prairie Theatre Exchange. You can read more about that here.