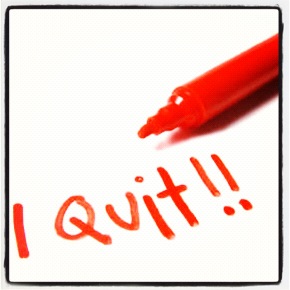 Are you in a situation where you feel you could use a fresh start?

Do you feel like your job is just a job, and has no real special meaning or purpose to you other than as a means of generating income?

Join the club. Or, on second thought, don’t. I mean, really — who would willingly want to be a part of such a lame club?

Getting comfortable and staying with a job that doesn’t match your ideals and aspirations is a slippery slope. The longer you stay, the harder it is to leave. You become a slave to your job as you rely on it for your income to pay your rent or mortgage and bills. Whatever your employer wants, you must obey, otherwise you might subsequently lose your income, treats, and pats on the head.

For the past 15 months, I’ve had a “job” of sorts. I’ve been doing contract work, as I wasn’t an official employee — although the working situation was very similar to that of an employer-employee relationship than that of an independent contractor — working as a blog editor and publishing newsletters for Tera Warner (www.terawarner.com), in addition to doing social media on Facebook and Twitter as The Green Smoothie Queen.

Since I was often editing other people’s blog posts, I seldom wanted to go and write and edit articles for my own blog, which explains in part why I’ve been grossly neglecting my own blog. That shouldn’t likely be a problem anymore, however, as less than a week ago I “lost” my “job”.

Why do I use quotes when I use the term “job”? (Not to mention “lost”…?)  Well, because it wasn’t a “normal” job.  Nor was I really an employee, as otherwise, taxes would have been been deducted from my pay and submitted to the government on my behalf, and I would have also received stat holiday pay and vacation pay — those are all benefits/symptoms/side-effects of an employer-employee relationship, which were absent in my working situation.

Either way you look at it or define the nature of my “job”, that still doesn’t explain how I “lost” it.

Well… let me start by stating that one of the requisites I look for in a “job” (i.e. income source) is having a very high degree of freedom, flexibility, authority, and independence. When it comes down to it, ideally, I’d be my own boss.

Knowing that Tera intends to shift her blog strategy to publishing 3-5 blog posts a DAY, 7 days a week, while simultaneously sending out a daily newsletter… it should be pretty evident that I would lose tons of flexibility and authority over my own schedule. And, since that is not something I’m willing to sacrifice, and she now wants someone who has a static schedule of availability, we’ve decided to part ways.

Tera has had nothing but positive glowing feedback for the quality of work I did for her, and I generally enjoyed what I did and took a lot of pride in doing a very good and thorough job, while paying special attention and care to layout, aesthetics, and finer details.

But, to be honest, I did not LOVE my job. I’ve always felt, on some level or another, a continual sense of frustration stemming from the fact that I was not and did not have complete control over my schedule, my rate of pay, strategies being implemented, etc. The fact of the matter remained that I still wasn’t my own boss. I realized I’d always feel this way as long as I allow myself and my income source to rest in the hands of someone else.

During the entire 15 months of working for Tera, I never once took an official vacation. Even while traveling, I’d always get at least some small amount of work done for her. I was even doing blog posts and newsletters while in Paris last year, which certainly put a bit of a damper on my trip.

On one hand, I’m a little sad about the situation of “losing” my “job” — I’ve put a lot of effort into building and maintaining the Green Smoothie Queen community on Facebook and twitter, in addition to upgrading the standard and quality of the newsletters and blog posts at terawarner.com. But on the other, I’m pretty happy about it, as it means I’m now back in charge of my life and my schedule once again. It’s a chance for a fresh start.

Starting on September 1st, I’m going to be taking the term “Fresh Start” to a whole new level.

For the month of September, I’ll be following a raw diet while doing daily hot Bikram style yoga every day for 30 days. Simultaneously, I’ll be decluttering my life and getting rid of (or selling) most of my furniture and worldly possessions as I get ready to move to a new city! (Montreal, here I come!)

Are you happy and totally in love with your job? What does your ideal job look like? What would you do? Are you already doing it? And if so, why not?

Do yourself a favor… if you’re not totally happy with you job, quit — and start working towards doing something that you totally and absolutely LOVE.

You deserve nothing less than having an awesome, happy and inspired life. So if your job drains you and tends to act as a thorn in your side, that’s a clear and evident sign that something’s gotta change… and guess what? You’re gonna have to be the instigator of that change! Otherwise, you’ll just get more of what you’ve already got!

If you’re not in a position to simply up and leave your job today, that’s fine. You can still make a plan and draw out action steps to work towards your goal. Start taking clear actions steps each day (or every few days) that will get you closer and closer to your goal.

I’m going to keep you posted as to my progress on my creative journey, so please feel free to let me know about your journey to freedom, independence and success, too.

Soon, before you know it, momentum will be in your favor and you’ll have no choice but to succeed! 😉