Next month, I’m planning to go to my hometown of Winnipeg to visit friends, family, and take in some of the Winnipeg Fringe Theatre Festival. I’m quite looking forward to it!

Being at the Fringe Threatre Festival is going to be interesting since I haven’t performed in nearly two years. I’m not exactly sure how I feel about that. When I take in live theatre, I tend to start thinking about diving into creating a new show and performing again. That said, I don’t really have a burning desire to get back on the stage again and perform. …Well, not really, but maybe a little? It’s complicated – but I’ll try to explain what I mean.

When I sit down and think about it, it seems to me that acting for the sake of acting and getting deep into a role has never really been, shall I say, my impetus for getting involved in theatre. I don’t think it was ever my true desire to be an actress. I just sort of fell into it, and then went along for the ride. And I’m glad I did, because I believe it to be a very important part of my life journey!

I think one of the reasons I was was whisked away by theatre was because I desired to prove to myself that it was something I was capable of. I shied away from the stage and certainly experienced varying levels of stage fright. Yet despite that, I still had a calling to be on stage. And so, I answered that call and sought to be the kind of person who would overcome that fear – or, at the very least, feel the fear and do it anyway.

I love theatre as an art form as a whole, but I can’t say I was ever truly in love with the acting / performance facet more than all the other aspects of theatre. I was initially much more drawn to directing and design in addition to playwriting. Theatre was to become my preferred medium of expression by creating, producing, and performing my own independent plays.

Sometimes I find myself missing the process of creating a play and bringing it into the world, sharing it with people, and interacting with an audience. I like knowing that I’ve made an impact on someone else’s life. I’m not sure if I’ve given up on my past theatre career just yet. (Although it hasn’t really been that much of a career for the past 8 years or so, since I haven’t been deeply involved in it for quite some time.) Even so, I’m simultaneously a bit reluctant to get back into it.

My last show, which I only performed in one city, was vastly underdeveloped by the time opening came around, and of course I bombed my opening performance and got a horrendous review based on that horrendous opening show. That’s been a pattern I’ve had for a while:

… And that pretty much brings us back to the present – or, to just under two years ago when my last show wrapped up at the end of July, 2017. I’ve had too many of these frustrating experience, and I know I’m to blame. You’d think I’d learn. Maybe I’m fearful of trying again because I’m fearful of repeating the same dreadful pattern. But that doesn’t stop me from thinking about it every so often.

Now and then I’ll find myself thinking about potential show ideas that I could, just maybe, attempt for next time. Although next time I want to ensure that I’m beyond prepared. That would certainly be a refreshing breath of air!

One of the show ideas I’ve tossed around in my head involves a format I’ve never done in my life, and it sort of terrifies me: Portray myself on stage. Not a character, not a work of fiction. Portray my real self and share stories about life. Share my actual thoughts and fears and demons. You can see why this might terrify me.

Part of me desperately wants to attempt this type of show. I’ve never done anything like it, ever. I have no idea if it’d be any good. Have I even led an interesting enough life to warrant such a show? But the very fact that this scares me tells me that I should probably explore it.

If I did a show based on my life (it’d be a storytelling style play, I believe), I ask myself if I’d have the courage to be blatantly transparent about my self and my life. I truly want to. But would I have the balls to do that if I knew my family would be there in the audience?

Ultimately, I’m pretty sure this is something I’d like to explore. I don’t have a specific idea as of for the theme I’d want to explore for this type of show (aside from daring myself to be as authentic and transparent as I could be), nor for the stories I would share. But it’s definitely something that’s been on my mind, and I’m so curious to discover what kind of show I’d come up with if I were to pursue this idea.

I suppose I could consider this bog post as a means of “leaning into it” – “it” being the idea for this storytelling show in which I’d portray my unabashed and unadulterated self. Hmmm…

This above all: To thine own self be true. 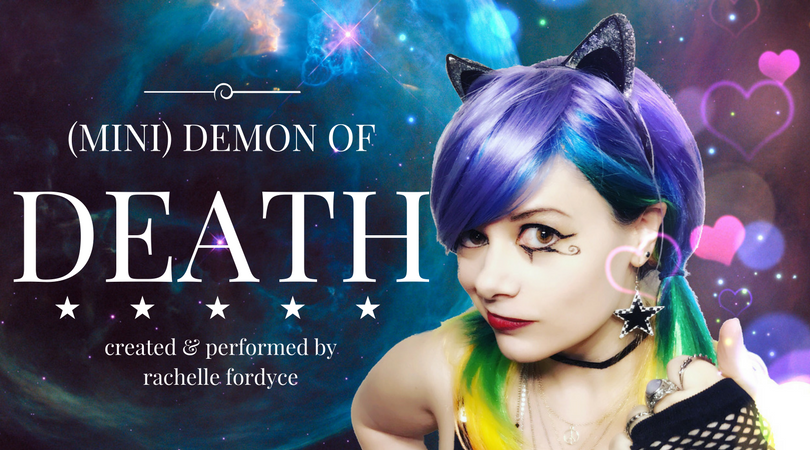 I’ve been super duper busy trying to get everything together for my new show, (MINI) DEMON OF DEATH! (What a fun title, right?)

It’s hard to believe opening is just under a week away. Goodness, time is slipping away like sands through an hourglass…  AND SO ARE THE DAYS OF OUR LIVES! 😉

Seriously though, the reason for this posting is so I can share something I wrote up that I sent out to various media sources and post it here as well.

I suppose you can call it press release of sorts, but in this case since I’m posting it here to my blog… would that make it a blog-release? Ha ha. …Yeah, your guess is as good as mine. 😉

Anyway, in my writeup below I refer to myself in the 3rd person, as is often practiced in these sort of things as I far as I’m aware. I hope it doesn’t sound too odd! (But I’m sort of odd myself, so either way, I suppose it’s a win-win!)

…Apparently my quirkiness is in full throttle mode today. Clearly I am very busy and stressed!

With that said, and without further ado… as previously promised in my last blog post, you can find out more about what to expect from (MINI) DEMON OF DEATH below… Enjoy! <3

The tagline for the 30th annual International Winnipeg Fringe Theatre Festival, “Nothing is for sure, everything is possible”, is sure to ring true with the interactive nature of (MINI) DEMON OF DEATH, perhaps more so than any other show at this year’s festival.

In (MINI) DEMON OF DEATH, the audience meets and interacts with Death.

Saucy, seductive, and bitterly sweet, Death has temporarily person-ified (or demon-ified) herself into a body, allowing her for the first time to interact with humans, i.e. the audience, while they’re still alive.

Death incarnates under the premise that she’s here to tally man’s mortal (mis)deeds — a task normally reserved for the recently departed in their formal end-of-life review. But it turns out she has other motives as well.

She’s been watching humans evolve from the very beginning. She’s fascinated by them. At times humanity can seem like a train-wreck; it’s tragic and gross but you can’t look away. Simultaneously, she can see humanity’s hopes, dreams, desires… The biological side of life can be rather strange, but when you get down to the core of the human condition, Death has nothing but love and hope for humanity, although she may be reluctant to show it at first.

In (MINI) DEMON OF DEATH, Fordyce explores various topics, from the birth of the Universe at the moment of creation, aka: The Big Bang, life, evolution, the fate of humanity, and the ephemeral nature of all things; essentially: Life, the Universe, and Everything. More so, she wants to explore what drives us, i.e. humanity, to do what we do.

Due to the interactive nature of the show and the inherent improvisation that goes hand-in-hand with this style, each performance will be a unique never-to-be-repeated event in the spacetime continuum.

(MINI) DEMON OF DEATH marks Rachelle Fordyce’s seventh self-created solo Fringe show, and her fourth interactive show. Her participation in this year’s festival marks her ninth time performing at the Winnipeg Fringe after a five-year absence, and her first time producing as a BYOV (Bring Your Own Venue) production.

ADDITIONAL BACKGROUND:
Rachelle Fordyce first performed at the Winnipeg Fringe in the year 2001 as part of University of Winnipeg’s production Fear and Misery of the Third Reich (which also performed at MTC’s annually recurring winter Master Playwright Festival).

Some of Fordyce’s other productions include S.M.I.L.E. while you D.I.E. (CAFF lotto-winner tour 2005), Daniel MacIvor’s Wild Abandon, and unADULTeRATED me (CAFF lotto-winner tour 2010).
Most recently, Rachelle Fordyce was responsible for inviting premiere Buffon performer
Eric Davis of Red Bastard fame to teach a bouffon workshop in Winnipeg this past spring.
The workshop was produced in association with PTE School.