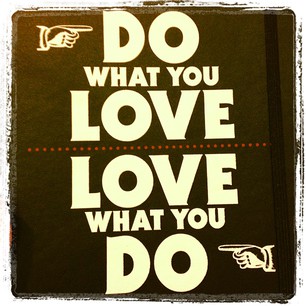 I just spent the past month traveling through Europe. I’ve visited Germany, the Netherlands, and the UK.

I’ve enjoyed my travels quite a lot and am ever so thankful for the experience, despite the fact that I’ve spent way more than I can really afford right now. (Yay for credit cards!) I could have let the lack of funds hold me back, but I see debt as temporary, and I didn’t want to let money (or lack thereof) stand in the way of my traveling and attaining new experiences… even though going temporarily into debt might not seem logical.

During some of my travels I’ve found myself to be in a bit of a funk when it came to the topic of finances, and even my career. Essentially, there’s been a lot of confusion and uncertainty in this realm. For the past little while I’ve been doing virtual assistance as a means of income, which mainly consists of editing and social media for other clients. (It’s funny how I’m great at promoting other people and their work or affiliate joint ventures, but I haven’t much motivation to do so for myself.) I typically only do work for one client at a time. My last client, Nomi Shannon, is trying to stiff me for $750 worth of work that I did for her, which needless to say, sucked. I promptly dropped her as a client, seeing as I don’t exactly feel comfortable continuing to provide my services to someone who behaves so dishonestly and unethically.

Have I given up on theatre? I still love theatre, but I haven’t been actively pursuing any projects since my last Fringe play last summer. And although I love theatre, there’s a part of me that questions whether or not I should continue my pursuit and involvement in the field as my career, or if I should pursue something else that might have a better chance at having a larger and more significant impact on the world.

From a very young age, I’ve had a strong desire to do something with my life that will result in a significant impact. Something life changing – not just for myself, but for the world at large. I desired (and still do desire) to have such a large impact on humanity that my name would go down in the the history books and everyone would know who I was long after my passing. Einstein. Shakespeare. Newton. These are all names we know so well, and so long after the owners of such names have trod upon this Earth.

When I was younger, I never thought I’d wind up choosing theatre as a career path. I was pretty certain I’d choose a career path in math and sciences, or possibly even literature or music, although as to what I’d specifically wanted to do, I was never 100% certain. It would seem in a way that theatre chose me. And seeing that theatre and film are so closely related, I would really love to extend my career in that direction as well…

So, back to my funk: Here I was, on an extended trip in Europe for a month – seen by many as an extremely privileged activity – and I found myself to be in a funk. Why? Well…  Aside from the financial situation, I suppose you could say I’ve been feeling some frustrations in regards to my purpose, or lack thereof, in life. I love traveling to no end, but at the same time, a feeling of worthlessness was creeping in due the fact that I hadn’t made any modest or notable contribution to the world in quite some time. I was reminded of this fact by someone quite dear to me, and quite honestly it made me feel like shit.

I’ve always wanted to change the world and make it a better place, yet here I was merely being a consumer of sorts, a mere participant in life, yet not really contributing or adding anything of significance or importance to the world and just traveling about being a tourist.

I always wished I had a sense of certainty pertaining to my purpose in life, so that I could feel confident in pursuing it with wild abandon. Honestly, I have so many varied interests and talents, and therefore so many potential paths to take and choices to make, it’s hard to feel certain and confident as to which path to take. Surely one path must be superior to all others….

While in London I was touring the Westminster Abbey, a beautiful church and monastery in London. At first I was reluctant to take a tour of the place, as the £18.00 price of admission seemed ridiculously high for a place dedicated to worship. Despite the price, I decided to anyway. Westminster Abbey is not only a place of worship and monastic residence; it also houses tombs and monuments to past monarchs, as well as many of humanity’s greatest influential minds. This includes Charles Darwin, Isaac Newton, Chaucer, Charles Dickens, and Shakespeare, just to name a few.

Being surrounded by so many monuments and testaments to many of humanity’s greatest minds was overwhelming. I wanted to be the type of person that might, one day, be honoured in such a place by such a monument. Not for the honour or glory of the monument itself, but because of what it represents – a great contribution of significance and positive influence to the collective human culture and mind.

It being a place of worship, there was a mass in session during the time of my visit, as well as a couple small areas devoted to rows of tea light candles lit for prayers. I believe this was actually the first time I’ve ever lit a candle in a church to say a prayer.

I’ve never considered myself to be a “religious” person. My father’s side was Protestant and my mother’s side Catholic, but when I was a baby I was baptized as Catholic. That said, I’ve never really identified myself as a Catholic, let alone Christian. As a teen I considered myself an atheist. As an adult, I’m not really sure how to label myself. I don’t really like using the term “God” because the meaning I assign to that word is often very different than the meaning most others assign to the same word. That being the case, I prefer to use the word “Universe” in place of “God”.

Even so, I was inspired to light a candle and pray – if you want to call it prayer – to seek inner guidance in my personal quest for choosing the “right” path for my life and career. I desperately wanted to know what path I should choose and take in order to have the most positive and influential impact possible.

I guess you could say I was praying to the Universe, or to myself, or my higher self, my future self, or even my “soul” – that part of me that is wise and free from earthly fears that may keep me stuck at times. I prayed to that element of myself that is inherently connected to all points of life and time and space at once, and asked to know what or how to best put my skills and talents to use to serve humanity’s greatest good.

Before I had even finished my silent prayer, I received an answer.

“The source of all great transformation is Love.”

Within my own mind the voice was so loud and clear. I was intrigued to note this voice seemed to be that of my own, yet with an added element of wisdom. I instantly knew this to be the truth. My eyes welled up with tears, then silently trickled down my cheeks. I was reminded of a truth I had already learned, but had apparently forgotten.

It didn’t matter what path I took or what I specifically chose to be the focus of my life and career – that was up to me. What matters most in order to have the most impact on the world is simply to love. Love is the greatest transformational power in the Universe.

Love what you do. Do what you love.

Let love be your motivation and your inspiration.

It seems so simple, doesn’t it? In some ways, it is. In other ways, it’s harder than one might think. With all our technology and advancement and the influence of our modern day and age, it seems harder to live a purposeful life centered in love.

It’s likely that Love is the one thing that our world can use most right now. If all of humanity were more aligned with love, would there be hunger? Would there be war? Would we continue to pollute our planet? How many people do you know who love their jobs or the work that they do? How many people do you know who dislike – or even hate – their jobs?

Since I’d say I tend to know more people that are unsatisfied with their jobs and the work that they do vs. those who are completely happy and in love with their life and life’s work, I’m somewhere in the middle. That said, I’d like to expand my network to include a lot more people who are living a life of passion, purpose, and love.

Not only am I convinced that living every aspect of my life in alignment with love will solely lead to my achieving true success and happiness in life, I am also convinced it’s the only way we as a whole will truly be happy and thrive.

I’m still not entirely sure what I should do next in life… Write a screenplay or a new stage play? Put together a vegan recipe book? Make an attempt at producing my own low budget films and share them online? Compose and create music? Blog??  …I suppose the medium doesn’t necessarily matter so much, as long as my motivation and message is aligned with love.

How well is your life aligned with love?

The more you live your life with love, the easier it is to change the world and make it a better place.

If you’re not sure what you’re passionate about, I’d highly recommend The Passion Test. It’ll help get you on the right track.

If you’re reading this and even if I’ve never met you, please know that I love you.
xox
Rachelle 🙂