Well, it’s been a few weeks since I’ve posted an update on the tour. I just performed my first show in Toronto as of four hours ago. I’m going to update a bit on how things went in Montreal, London, and my first performance in Toronto.

Montreal Fringe was an interesting experience.  I was still experimenting with my show during the Montreal Fringe.  My first performance in Montreal occurred on a Friday night at 11pm at a new venue to the Montreal Fringe Festival — it was at a place called “Le Petit Campus” and there was a dance club on the level above it.  It being Friday night and late, the dance club above was in full swing and there was heavy a bass-line thudding from the dance music above.  It was *extremely* distracting and disruptive, but I tried my best.  Despite the poor conditions of the venue that evening, two or three of the audience members got in touch with me at some point afterward via the internet to tell me how much they appreciated the show.

The first person who contacted me later that same night was named Radu:

“Hi Rachelle,
I arrived at your show completely by accident, and had no idea what to expect.
I’m glad I did – your show was sometimes funny, sometimes sad, and quite touching. Congratulations – it takes a lot of courage to stand up there, brave the hostile conditions, and just say “here – that’s me”. I would not dare – but then again, I’m not a stage performer. (…) Once again – congratulations, keep singing – and cut down on chocolate.
Best of luck
Radu Juster
Montreal”

(You have to see the show to get the chocolate comment.  🙂 )

Despite having received this encouraging feedback mere hours after the initial performance, I felt very dissatisfied with my show as a whole.  As I mentioned earlier, I was still tinkering and tweaking it, and as such, I continued to experiment with the script a little for the next handful of performances.

My Monday night performance in Montreal was a particularly odd one.  I had just found out that night that my venue technician was no longer with the Montreal Fringe Festival, and therefore a new technician was assigned to the venue and to my show.  Beforehand I went over the show with her, but I was really stressed out about it since we had to go over things last minute, and then I was rushing to get my costume on in time, too.  …Anyway, to make a long story short, I felt that my experiments with the show that night didn’t go over too well, likely exacerbated by my being a stressed and rushed prior due to the new technician assignment.  …As luck would have it, a reviewer was in the audience that night, and he totally panned the show.

…Of course, I firmly believe that everyone is entitled to their own opinion, and I don’t expect everyone to love my show.  That being said, if someone is going to write a review of a play, I think it’s not only fair, but imperative, to review the play as a whole from start to finish.  This particular reviewer did not do so.  According to his own review he left half-way through show.  Ah well.  … I’m not going to quote that awful review, but it’s easy enough to find online if you care to do so.  It’s pretty harsh though, I must say!

Anyway… Later that same week, I had received another message from a fellow named Louis-Paul who had also been in attendance at the first show.  He wrote:

My name is Louis-Paul Rioux. I was at your show friday night. I think you were very brave for the premiere. The dance upstairs was very annoying, we couldn’t hear all your lines, it was very difficult for you to concentrate. Nevertheless, you made a very good, very intelligent show, the best I saw at the Fringe this year. Your character is so sweet, your knowledge of the French language is endearing, The story is heartbreaking. (…) I think you’re very talented. You deserve better. Cheer Up!

By the last couple of performances in Montreal, I had started to figure out what seemed to work best and what wasn’t working.  My last show in Montreal was, in my opinion, the best of that Festival.  I had a very friendly crowd that night — one audience member even bought Fizzy (my red-nosed alter ego) a shot to drink while on stage doing the show!  It was hilarious and awesome!  🙂  My friend Pierre was also in the audience that night and he took some pictures.  Here’s one of the photos he took: 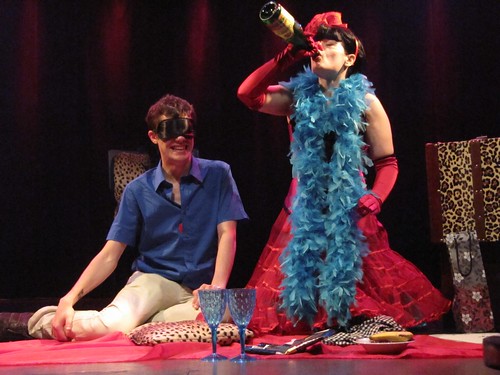 Fizzy rehearsing with an audience member for her “hawt” date.

From Montreal to London

The trip from Montreal to London was a hectic one.  My last show in Montreal ended at Midnight Saturday morning, and 11 hours later I had to be in London for my technical setup at my performance venue in the London Fringe.  I had tons of packing and preparation to do that night, so I didn’t sleep at all before leaving for the airport at 5:15 in the morning, save for an attempted 10-minute nap!  WOW was I ever sleepy!
Thankfully I caught a little sleep on the plane to Toronto.  Once in Toronto, Steve and I took a shuttle from the airport to a nearby hotel to pick up a rental car. Then we drove directly from there to the performance venue in London.

I had a little under 2 hours to do my tech setup.  The tech setup was pretty straight-forward, and our venue technician was awesome to work with.  After it was complete, I had about three hours before my first show.  I pumped myself up on soy chai lattes since I was so sleep deprived.  Before I knew it, soon it was time to perform the first show in London.  Curtain time was at 4:30 that afternoon.
The performance went really well and the audience seemed to love it!  I’m glad I performed so well despite my sleep-deprived state.  Afterward, some audience members posted some lovely reviews for my play on the London Fringe’s website  Here’s some of the audience feedback that was posted online about my show:

This was quite possibly the bravest thing I have ever seen on stage.

I’ve been married so long that I’ve forgotten about the process you go through when preparing to be close to someone. How huge a risk it is to bare your soul. Through mask and metaphor, this show gave me a whole new perspective on how much courage it takes to try to connect.

It was a wonderful performance, and I hope it does well.”

“I don’t often write reviews, but…
I lived in Edmonton for many years before moving here for my husbands work, so I’ve seen a lot of fringe shows at the biggest Fringe on the continent… BUT… This show might be the best show I’ve seen at any Fringe, any year. What an engrossing and amazing young performer. Look out world, she is going to be the next Shannon Calcutt.“
“Wow this is a brilliantly brave and funny show. Fizzy Tiff is a beautiful, sweet, smart funny lady with an amazing voice and a hilarious show! Love, love, loved it!”

I was thrilled with the positive feedback!  By the second performance in London, I had received my first standing ovation of the tour!  YAY!
I decided to experiment slightly with the order of my show for Tuesday’s performance.  … By the end of that performance, I had come to the conclusion that it was better the way I had already been doing it.   And so, I reverted back to the previous way of doing things for the next show, which again went great — as I had another standing ovation!!!  (About half or more of the audience stood for that particular performance.)  By the last show in London I had another standing ovation!!!  😀  WOOT!
On the last day of the London Fringe, the Best of the Fest Patron’s Picks awards were announced and given out.  *drumroll* …  unADULTeRATED me won the award for MOST DARING SHOW of the 2010 London Fringe!!!

I’m writing this entry after just having had my first performance of the show here at the Toronto Fringe.
The energy of the audience felt a lot different than it had in been London, so it was hard for me to judge how well the show had went after it was over…   but by the time I came back out on stage after the play was over to take my bows, an audience member stood up, then another, and then another, and more, until I had another standing ovation!
It is such a wonderful feeling to be acknowledged and appreciated for your work, expressed in the form of a standing ovation.  It means that my performance and work has truly touched and stirred people to such a strong degree that they’re inspired to stand and clap, expressing their gratitude and thanks.  Simultaneously, it is a very humbling experience, for I know I would be nothing without an audience.  And so I thank YOU, my dearest audience, from the bottom of my heart.
I hope the next six shows that are scheduled for the rest of the Toronto Fringe will have an equally enthusiastic response, if not better!  I’ll try to keep this blog updated a bit more frequently about how things are going along the tour.
… WOW…  My next show is already in 12 hours from now!
Time to get some sleep!
xoxo
<3
Rachelle

6 thoughts on “unADULTeRATED me — Update on Montreal, London, and Toronto Fringes”